This summer I submitted a proposal to  Chicago’s 49th ward (Rogers Park neighborhood) for a mural competition there, which I did not win.

My theme was a tribute to the now demolished Granada Theater. Formerly at 6427 N. Sheridan, the Granada Theater was one of the three largest movie palaces in Chicago, comparable to and possibly more opulent than the Uptown and the Chicago Theaters. The Granada was torn down in 1990. I grew up in Rogers Park and occasionally saw a movie or concert there. 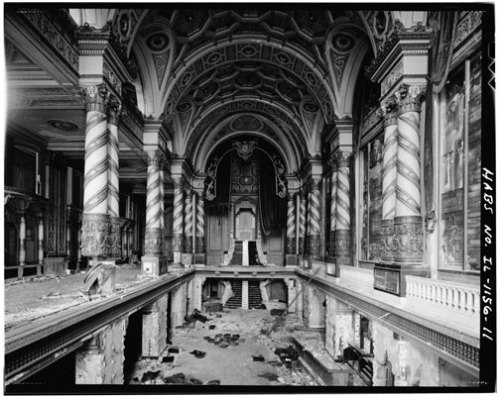 I think my present design still needs some work, but I hope to eventually create this important reminder and tribute near the site of the old theater itself. Perhaps as a tile mural for more permanence.

It was an interesting and not controversy free  process how this project  proceeded. The Chicago Reader Newspaper headlined an article (on Sept. 6th, 2010) about it here. And for more information about the Granada take a look here. You can also look at the The Historic American Buildings Survey (HABS) photos from the library of congress here. Search for Granada Theater.

This site uses Akismet to reduce spam. Learn how your comment data is processed.