In Early 2014 I had the privilege to be called up to work on the recreation of a church mural at St. Aloysius church in Bowling Green, Ohio, The muralist is Felix Lieftuchter (b. Cincinnati, OH. 1883). My job is as an in-painter, which is generally the only thing I do on these restoration projects. An in-painter is the person who paints in the  areas of lost paint.

Unfortunately the mural at St. Aloysius had been completely painted over sometime in the 1960’s.  So the first step was for the conservators to remove  the overpaint, a delicate process involving quickly removed paint stripper.

Once that was complete, we really noticed  was how bright  and high chroma the original was. In the pictures of the original with removed paint the mural may look a little washed out, but that is because there is still a chalky haze of paint on it. We looked at some other work by Lieftuchter at Holy Rosary Cathedral in Toledo, and were convinced that he used a very intense, flat, simple palette. This makes  sense if you consider that in the 1920s when this mural was probably painted, they didn’t have modern lighting – i.e., the church would have been darker.

Below is a slide show, and you can click through to see an additive process as I recreate the angel.

There is not much biographical information about Lieftuchter but what I could find, I posted on this biographical blog-post. He did major church mural decorations in Toledo, Salt Lake City, and Wheeling, W. Virginia, and some smaller churches.

As I mentioned earlier, the mural been completely painted over sometime in the 1960s. So the first step was to remove the five coats of house-paint that were on top of it. The mural had been painted in Kiem, or silicate dispersion paint, which is very durable, but of course there is no way to get it perfectly clean.  What’s being done is  a partial removal to find the design elements and completely uncover the figures. Then we repaint it as accurately as possible. We are using an isolation layer between our work  and the original, so the original is encapsulated below the new work.  Acrylic paints are being used for the new painting.

Below is a short video from the local newspaper interviewing Jill Eide about the conservation process.

The project is with Evergreene Architectural Arts from New York City. Jill Eide of Kenosha, WI. is running the job, doing both conservation and in-painting. The conservators (who are doing the paint removal)  are  Erma Duran of Tucson, AZ., and Neela Wickremesinghe of NYC. The In-painters are Terry Brackenbury from Providence, RI., Dana Brackenbury, also of Providence,  and me, Stephan Giannini, of Rockland, ME. Possibly a couple more people will work on the job.

Following is a gallery of images, mostly of unrestored work,  to establish a historical record. When we are done with the job, I will post a separate blog post of the completed work. 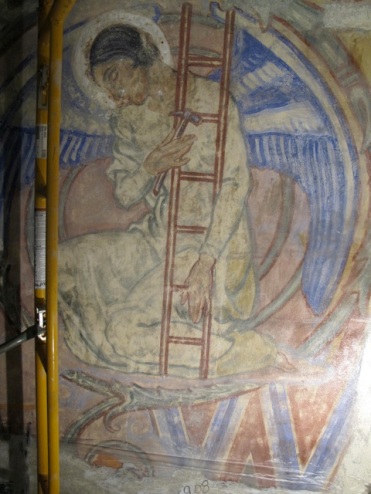 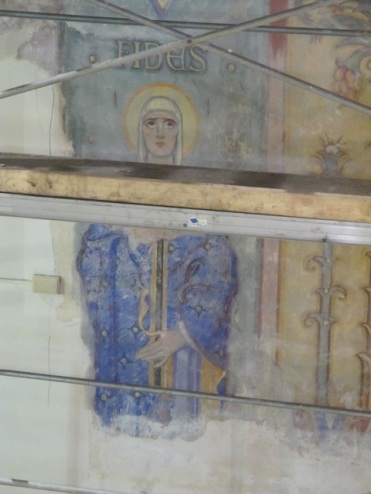 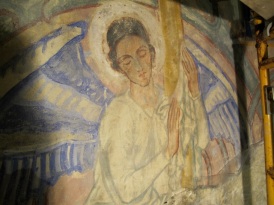 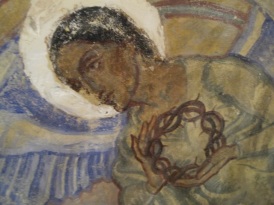 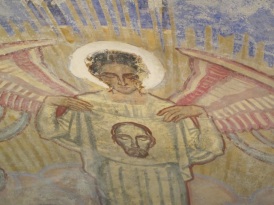 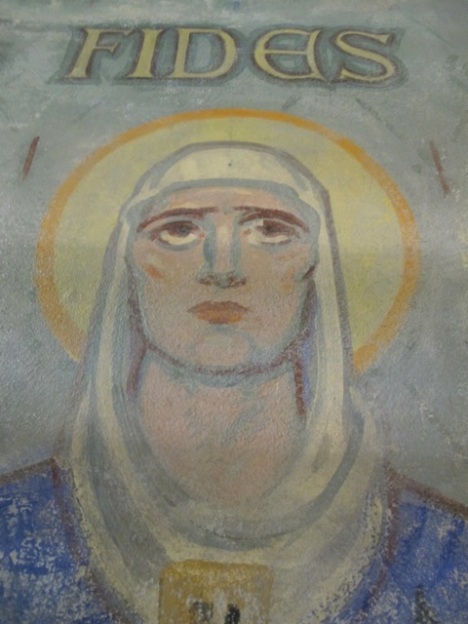 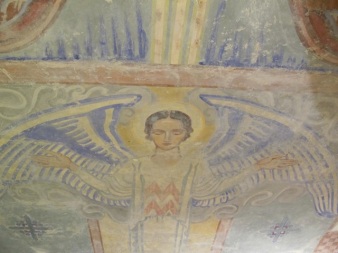 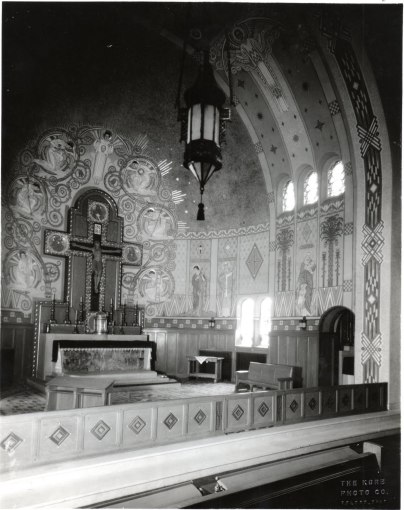 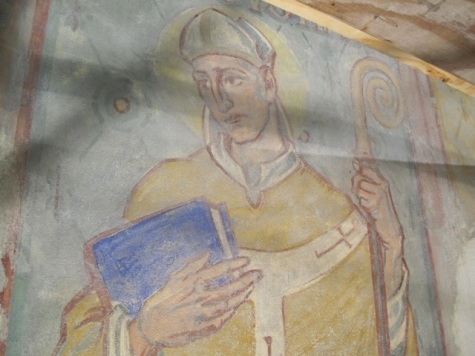 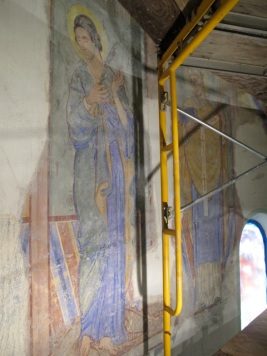 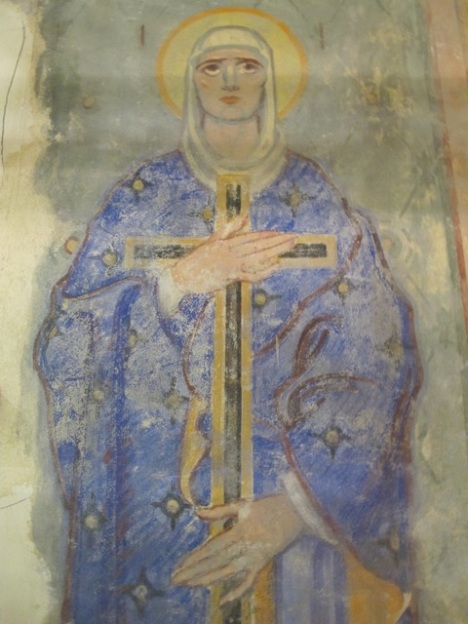 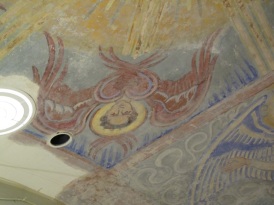 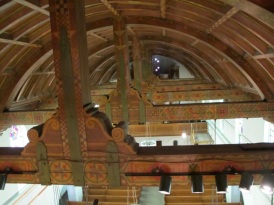 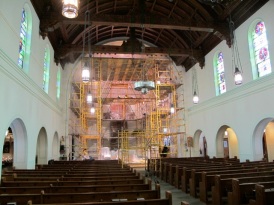 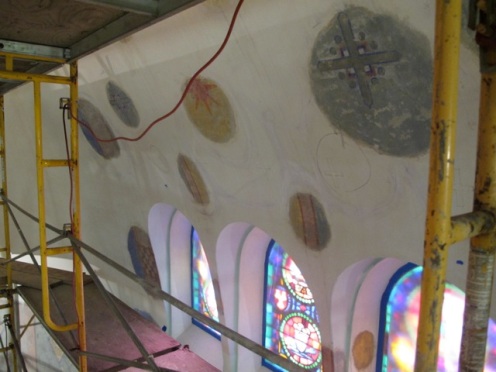 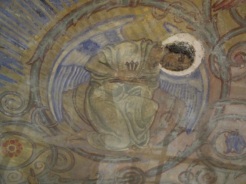 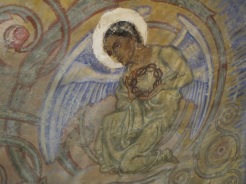 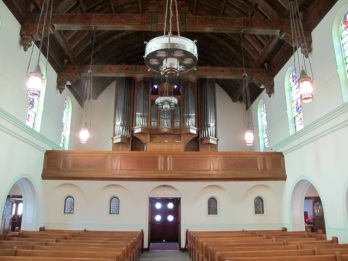 The choir and organ at the rear of the church 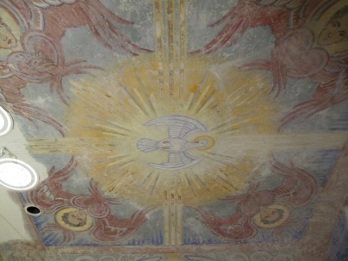 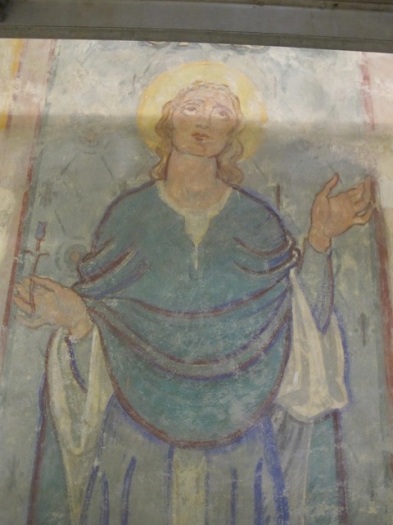 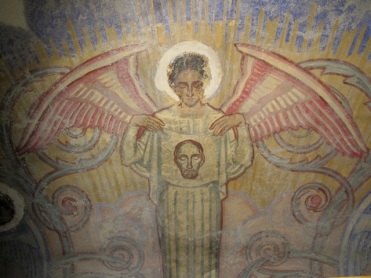 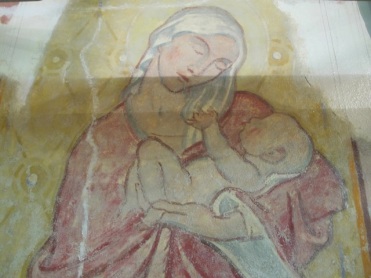 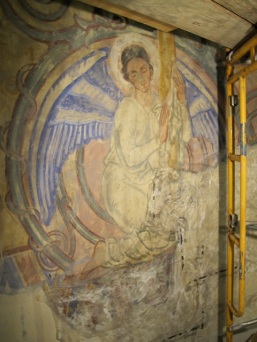 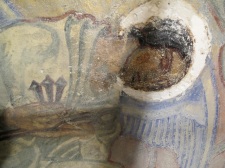 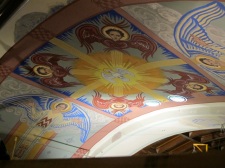 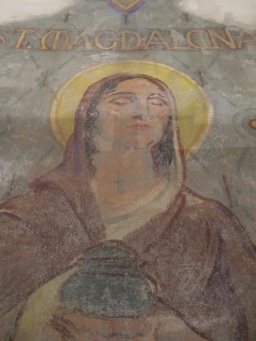 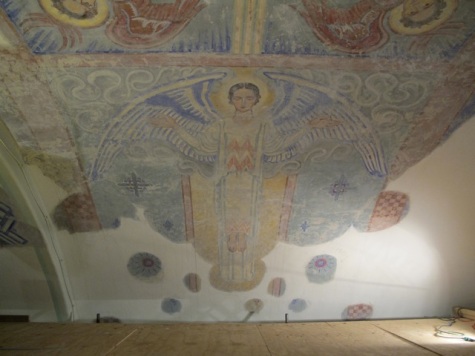 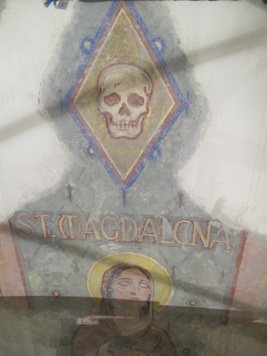 If you are interested in seeing small, inexpensive paintings I have for sale or auction take a look at my shop area by clicking  here.

This site uses Akismet to reduce spam. Learn how your comment data is processed.